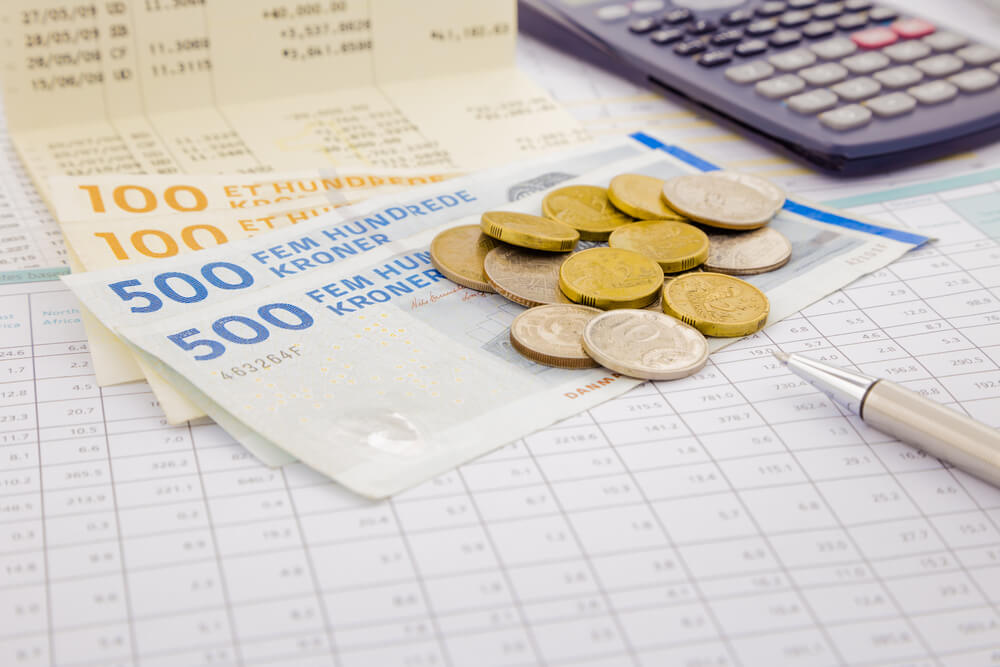 The Danish currency is known as the Danish krone, and it is also the legal tender in two territories belonging to the Kingdom of Denmark, namely the Faroe Islands and Greenland. In English, the currency is often called the Danish Crown, which is the literal translation of krone. A single krone is made up of 100 øre, which are similar to cents in a dollar.

In Denmark, while writing, the symbol for krone is usually ‘kr’ and it follows the amount stated rather than preceding the amount. For instance, 50 kroner is written as 50 kr and not as kr 50. In the foreign exchange market, the symbol for the krone is DKK. Also, for those who do not know, the plural of krone is “kroner” and not krones.

The Danes have been producing and using coins for centuries. However, it is since the 10th century that Denmark has been minting coins. The first recording coins in the country, according to archeologists, were minted based on the silver currency that was in existence in France, during the reign of Charlemagne. This standard is referred to as the Carolingian silver. When the Roman Empire was at its peak, the silver currency standard was replaced by the gold standard.

It may be of interest to learn that the silver currency used by France and Denmark and comprising pennies, shillings, and pounds, laid the foundation for the British sterling pound. The same standard is still being used in Great Britain, and the pound sterling is the national tender of the Isle of Man, Gibraltar, and the South Sandwich Islands.

The 10 Essential Facts Nobody Told You About Denmark

10 interesting & weird facts about Denmark. Things that you didn't know about Denmark BUT you probably should know

History reveals that the kings of Denmark tended to follow the currency practices of other kingdoms, with the aim to enrich themselves. As a result, the currency’s value was demonetized very often, and this was done by reducing the amount of silver that was present in the officially minted coins. Hence, Denmark had to come up with new currencies and remonetizations so that the citizens’ faith in the official currency was restored. In one of these remonetizations, the Danish krone was introduced and it is still being used in modern-day Denmark.

In Denmark today, coins are available in six denominations. These are 50 øre, 1 krone, 2 kroner, 5 kroner, 10 kroner, and 20 kroner. Inflation has been instrumental in phasing out coins of smaller value and that is why Denmark decided to do away with 25 øre coins in 2008.

Denmark has ensured that its coins can easily be distinguished by people who are visually impaired. They can do this via the color, diameter, and texture of the edges of the coins. The difference in color, more or less, goes back to the days when gold and silver coins were used as legal tender. Hence, coins of a higher value are minted using aluminum bronze and this gives them a gold-like color. On the other hand, coins of lower value are minted using nickel alloy and as a result, they have a silver-like color.

The weight and diameter of the coins increase with the increase in their value. When it comes to texture, not all coins have textured edges while others have smooth rims. There are still more coins, like 1 krone, 2 kroner, and 5 kroner, which are considered middle-value Danish coins, that have a hole in the center.

Denmark also issues many commemorative coins, and one of the most popular coin series was issued in 2005. The country issued 5 different fairy tale themed 10 kroner coins that depicted the tales penned by Hans Christian Andersen, a famous author from Denmark.

Since 1945, Denmark has been issuing many different series of banknotes and these are still considered legal tender in the country. Many of the banknotes have security features, like watermarks and holograms, to prevent counterfeiting. Today, banknotes in the country are available in five denominations – 50, 100, 200, 500, and 1000 kroner.

Danish Currency and the Euro

While Denmark is part of the European Union, it has not adopted the Euro. That is because the country held a referendum in 2000 and it was rejected.

Usage of Danish Currency in the Faroe Islands and Greenland

The Faroe Islands uses a local version of the Danish currency and it is known as Faroese krona. This currency is pegged at par with the Danish krone and even uses the coins prevalent in Denmark. However, the Islands have their own banknotes that were first issued in the 1950s.

Both Greenland and Faroe Islands have their individual IBAN codes that are different from the IBAN code of Denmark. So, if you want to transfer money between these countries, banks will view the transfer as an international transfer and accordingly levy fees on it.

These are the facts about the Danish currency. As a foreigner, who wants to live, work, or vacation in Denmark, knowing these juicy tidbits about the currency is a good thing. The history of the currency is fascinating and will enable you to understand why the people of Denmark are proud of their currency, coins, and banknotes.

Related posts:
Sugar Dating in Denmark: What You Need to Know
Are You Eligible for Unemployment Benefits in Denmark?
Find Out the PS5 Stock Status in Denmark
How to Get American Netflix in Denmark
Enjoy the Cosmopolitan Ambiance of the Biggest Cities in Denmark